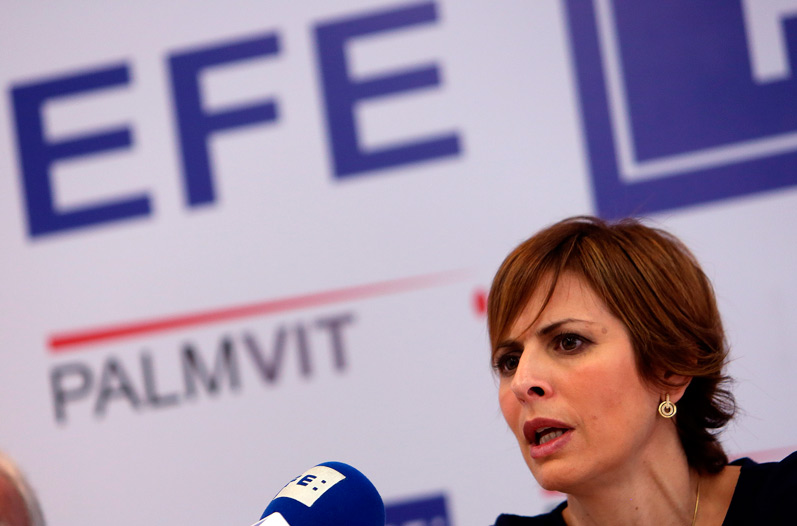 Bogota, Feb 8 (EFEEmpresas). In the meeting, presided over by Colombia’s Deputy Minister of Entrepenurial Development, Consuelo M. Ferrero highlighted that “when making a comparison between the market price of 100 litres of palm oil and 100 litres of Tocotrienol, a unique form of Vitamin E obtained from the same oil, Ferrero concluded that “the results speak for themselves and that while 100 litres of oil palm today generate sales of approximately US $92, the same amount of Tocotrienol distributed in cosmetics, for example, generates approximately $ 7,500 ” . Natural bio- oils can be 10 times more profitable than agricultural production or refining. In this the first EFE Forum in Latin America in which the Deputy Minister for Enterprise Development, Ministry of Commerce, Industry and Tourism of Colombia, Mr Daniel Arango, pointed out that Colombian exports in the palm sector grew 10.4% in 2015. Ms. Ferrero anticipated that “the potential for growth and development of Vitamins and Phytonutrients from Palm oil could be enormous in the food sector, especially if we consider that these processes are complementary to those used in refineries. Oil can be produced for human consumption and Bio-components simultaneously without being detrimental to either process.

This is because the Vitamins and Phytonutrients are extracted from the waste residues which are obtained through the refining process. We are talking about an industrial process which is carried out immediately after the crude oil has been refined.

The commercial use of the sources of Vitamin E, Provitamin A, Phytosterols, Squalene, or other derivatives found in some vegetables within the Food, Cosmetic and Pharmaceutical Industries are typically found in fortified foods, creams, medicines and vitamin supplements. The growing demand for bio- oils is due to its many qualities which reduce cholesterol, slow cellular ageing, improve eyesight, skin and cardiovascular health. Soft drinks enriched with beta carotene, biscuits, fortified cereals and milk with Phytosterols and Vitamin E, squalene creams and the nutraceuticals market in general are a good indicator of how profitable the Vitamins market could be for oil producers since, according to Euromonitor Research, the growth rate was 8 % in 2014 generating a turnover of $170,000 million USD. This is not surprising when you consider the current drive to delay the consequences of ageing and the health problems of modern society. Ms Ferrero concluded her assessment by stating that this has the potential of revolutionising the oil industry. Currently there are few companies in the world that have this technology yet these companies are working with determination and enthusiasm to break into the market.

palmvit.com is a Spanish Chemical Engineering company specializing in the extraction of Vitamins and Phytonutrients from plant oils such as olive, palm, sunflower and soya . It is currently in the process of building an Extraction Plant in Honduras as well as developing several projects in other parts of the world.

Extraction of natural Vitamins from oil, 10 times more profitable than...